Catching a Glimpse of the Ancestors, September 29, 2014

I grew up with six brothers.
That's how I learned to dance -
waiting for the bathroom.
~Bob Hope


Greetings to all of you from Peru where Cindy and I are enjoying ourselves with a couple friends. Today we are on our way to the scenic and lofty Colca Canyon (where we are staying at over 11,200' elevation) in the southern part of this beautiful, historic country. 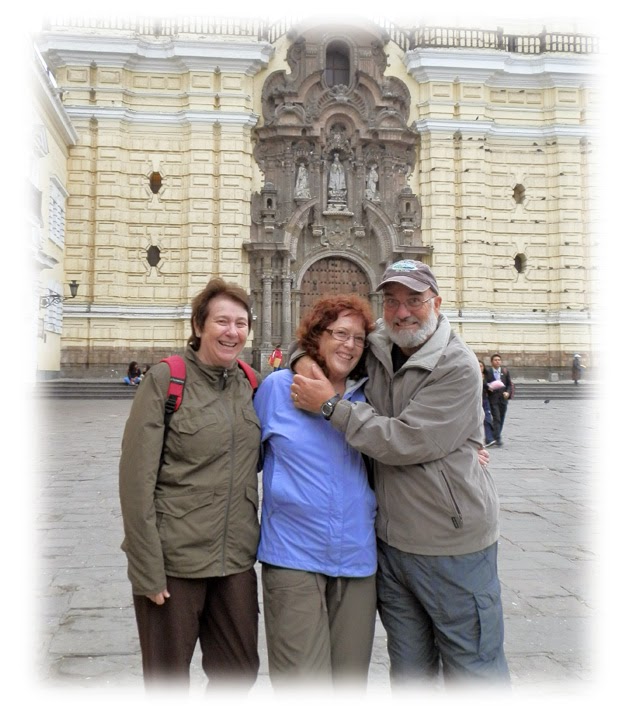 The first picture was taken a few days ago in front of the Basilica San Francisco in Lima, Peru and shows our traveling companion Linda with Cindy and me. We had just come up out of the sprawling catacombs beneath the church behind us, where we walked through a maze of dark, dank caves. All around us were thousands of ancestral bones. At one point we heard music and looked up to see a ventilation grate in the ceiling of the catacombs. Through the grate we caught a glimpse and heard the sounds of a worship service in progress in the Church over our heads. It was somewhat eeire, a little bit comforting, but all a part of this strange but memorable subterranean experience. Since then I have considered how that is what the Shepard's Crook is: a way of catching a glimpse of the lives and stories of our ancestors whom we seek to remember. Thanks to Barbara, our other travelling companion, for taking this picture.

George and Serena Gower. In this post I am offering a glimpse of my Great Grandparents George Gower and Serena Turner. On September 15, 1893, 121 years ago, they were married in Timbo, Arkansas, a little country town west of Mountain View. Interestingly, their son Leroy and his wife Nola were also married in that same little town, also in the month of September, but 28 years later. Timbo was, and still is, the only town of any size in the area known as Sylamore (in Stone County) where our Gower and Shannon ancestors were farmers.

Like many young adults in the 19th century, George and Serena were young when they married. He was 20 and she was just 17. George's grandfather Jackson William Gower had been among the first Gowers to settle in Stone County, Arkansas in the 1850s when it was very sparsely populated and a welcome place for homesteaders. 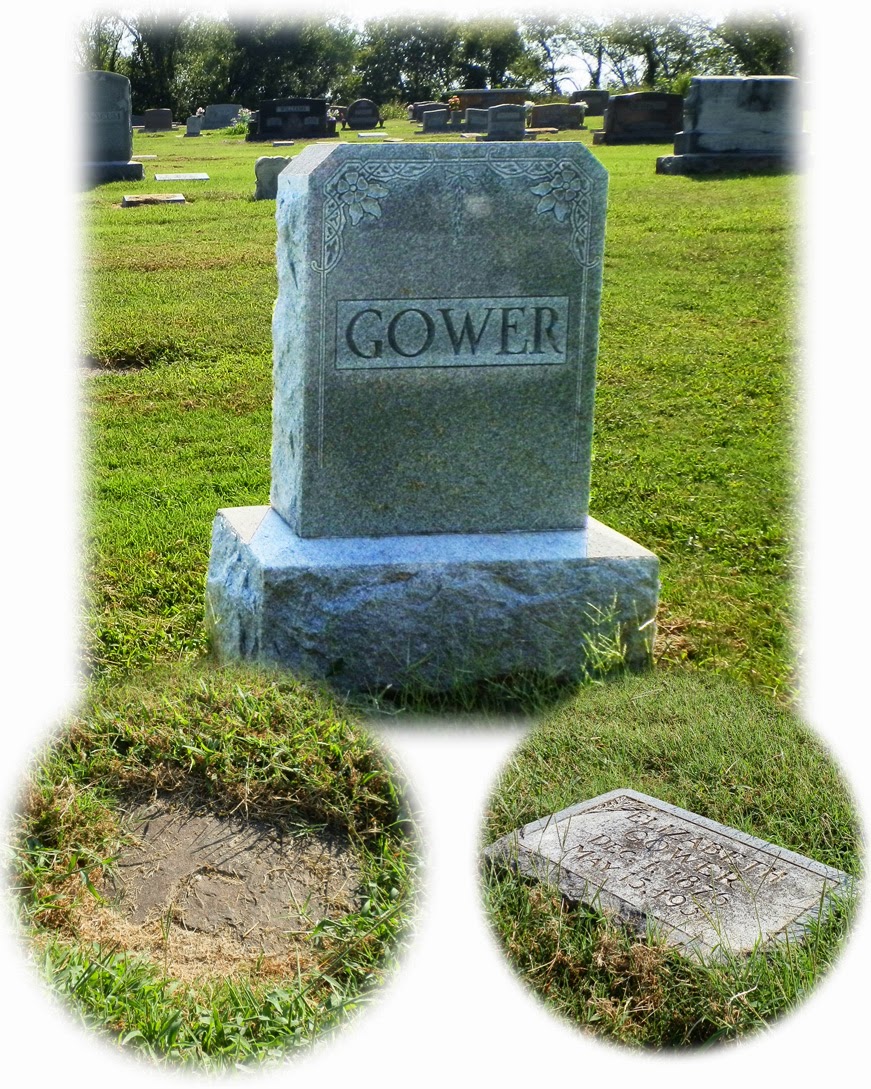 Serena Turner's family was from Tennessee and came to Arkansas not long before she was born in 1876, and settled east of Mountain View on the White River. She never attended school or learned to read or write.

There were not too many options for young couples of farming families in late 19th century Arkansas, so George and Serena also became farmers. The 1900 Census, when he was just 27 and she was 23, shows that they owned their own Sylamore home and farm outright.

On their farm they raised 6 children, the second one being my grandfather Leroy Gower. Their first child Lloyd W. Gower was killed in WWI in France, and is buried today in Stone County Arkansas. There is a marker in Mountain View's town square honoring him.

Farming in the hills of the Ozarks was not the most lucrative profession, so George and Serena, like others of their kin, moved westward into Oklahoma in the 1920s and settled in Okemah where they farmed and lived the rest of their lives. Serena died in 1931, George in 1944.


The first picture (above) shows their graves in Highland Cemetery, just north of Okemah. He has one of the most rustic looking headstones, with nothing but a rough "G" carved onto it, while hers is significantly more attractive (see the circular insets). Sometime after their deaths, their family erected a large headstone alongside their graves with simply "Gower" written on it. 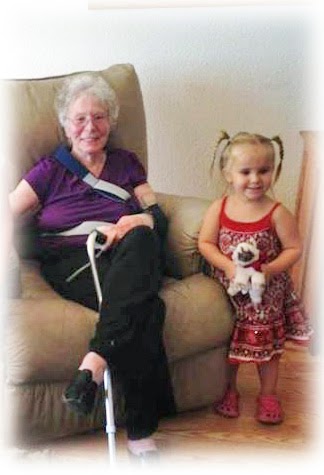 Happy Birthday to Alexandria Cotten. Today is the birthday of Alexandria Cotten, of San Antonio, Texas, one of the direct descendants of the aforementioned George and Serena Gower. Lexi is the younger daughter of Heather and Sean Cotten, and another one of the GG Grandchildren of Leroy and Nola Shannon Gower.

The second picture, taken in August in Oak Harbor, Washington, shows Lexi with her Great Grandmother Vicki Gower Johnston. This picture was taken in the home of Vicki and her husband Duke.

Another Texas birthday. Today is also the birthday of Cathrina Helms Clark of Lubbock, Texas, the wife of Jerry Clark. The third picture, a selfie taken in Yosemite this past summer, shows Jerry and Cathrina enjoying the beautiful scenery of California alongside a stream in the Sierra Nevada. 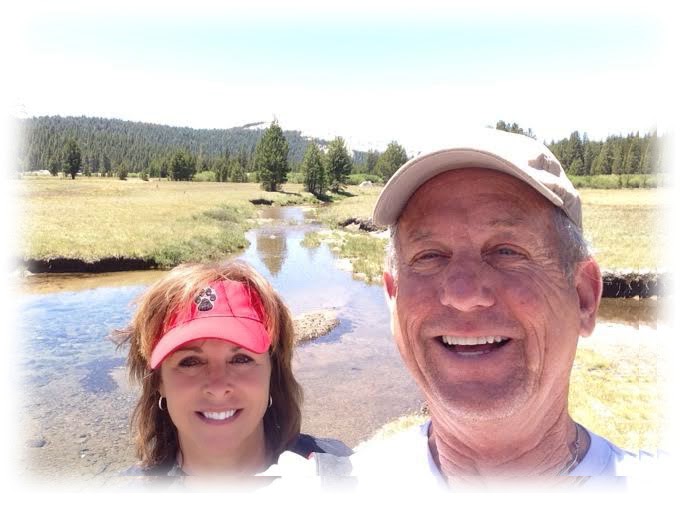 Cathrina: Thank you for the birthday wishes! We have had a great year! My, how quickly the years pass! We took a road trip up Hwy 1 (north of LA) this past summer. What a beautiful drive. We also really enjoyed Yosemite! I truly understand why Yosemite is one of your and Cindy's favorite places. Death Valley was very interesting. I really enjoy working at the school and being on the same work schedule as Jerry. Our grandchildren are growing and all doing well!  All of our children are doing well. We have so much to be thankful for. So exited to hear about Maida's 90th Birthday party Nov 1 in Anacortes that Jerry will be attending.
- - -
Steve Shepard
Posted by Steve Shepard at 3:35 AM