One of the more intriguing people in our family tree is Roena Norton, the grandmother of my grandmother Nola Shannon Gower. Here is a lineage from Roena's parents Andy and Elizabeth Norton to my grandson William Shepard, one of Roena's youngest descendants:
The last 6 of the 8 consecutive generations listed above are pictured below. Unfortunately no pictures exist of either Roena or her parents. Starting in the upper left are William Shepard, Nathan Shepard, me, Maida Gower Shepard, Nola Shannon Gower and Finetta Dearien Shannon. 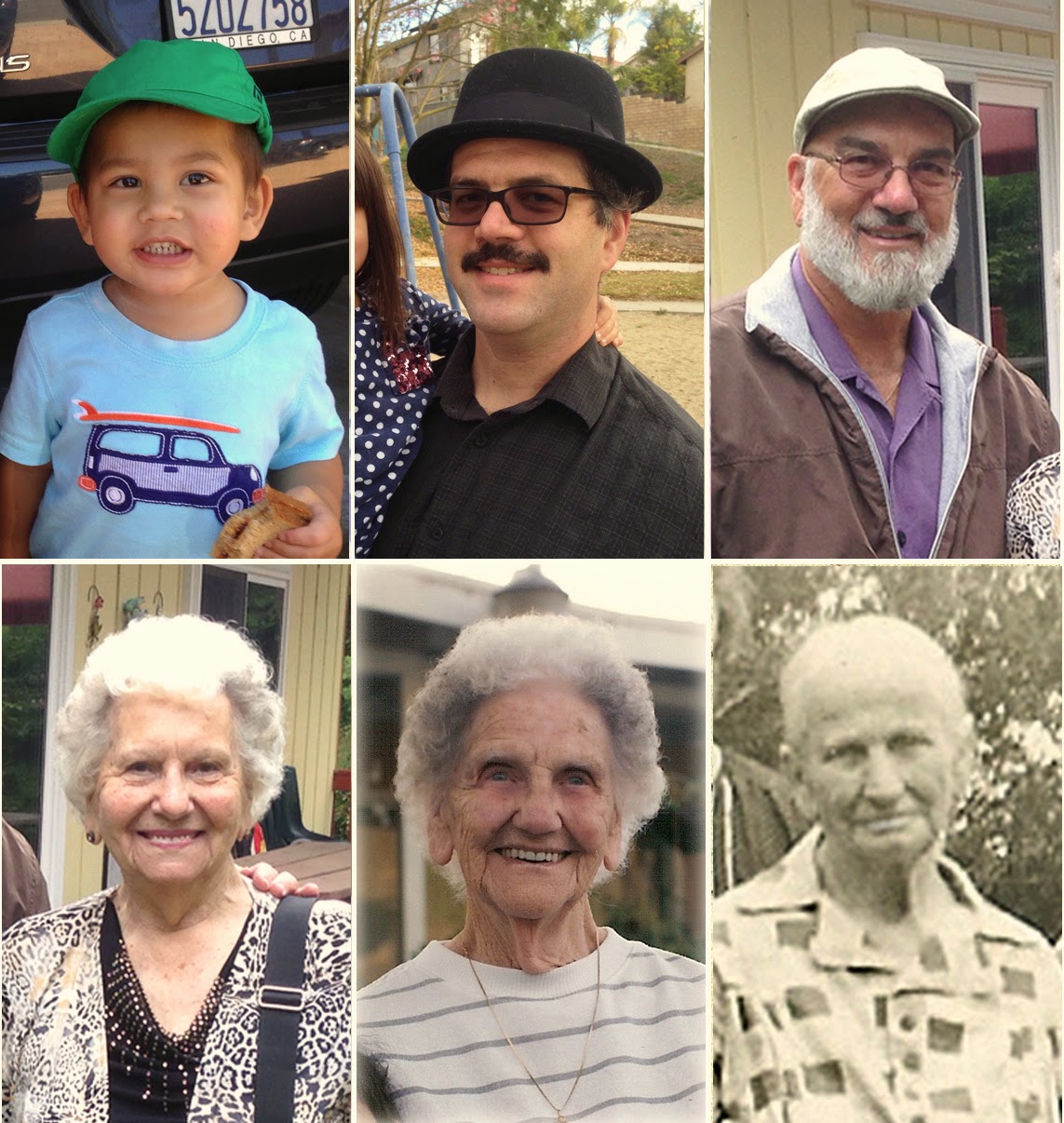 New Light On An Old Story. Roena's life story, and especially that of her daughter Finetta Dearien, I have mentioned numerous times in this blog. Their story is as tragic as it is complicated. The father of Roena's only child, Finetta, was her stepfather Augustus Dearien (1814-1900). For all the years I have been doing family research, my only source of information about Roena has been family tradition. Recently, however, it has come to light that she appears in the 1860 U.S Census, the first tangible historical evidence for her.

Part of the reason that this record has not been available before, is the fact that her name is listed as Roena Derrin. Her birth parents were Andy Norton and his wife Elizabeth Mitchell Norton. "Derrin" was not Roena's birth name, but a misspelling of the last name of her stepfather Augustus Dearien, who was her mother's second husband, and in whose household Roena spent much of her youth.

There are numerous Arkansas records in which Augustus Dearien's name appears: Census records, Land Grant documents, military records, and his grave in Blue Mountain Cemetery in Timbo, Arkansas. In these records his last name is spelled various ways, including Dearen, Darien, Dearien, as well as Derrin.

Because he fathered a child by his step daughter Roena, A.M. Dearien has become a despised person to many of his descendants. Ironically there are numerous records showing him in Stone County and elsewhere throughout his long life, while his step-daughter Roena Norton seems to have disappeared without a trace after she gave birth to Finetta in 1861.

The Value of the 1860 Census. All this makes Roena's appearance in the 1860 U.S. Census records so valuable. They provide us with some important information about her. I had been under the impression that Roena was a school girl in her middle teens in March, 1861 when she gave birth to her daughter Finetta by her stepfather. In previous blog posts I have even written as much. But the 1860 Census lists her as 20 years old in September, 1860, meaning that she was 20 or 21 when her daughter Finetta was born.

The Census also shows that the Dearien's home was in the township of Richwoods, in the hills a few miles south of what would become Mountain View, Arkansas. In 1860 unincorporated Mountain View was little more than a busy crossroads populated by a few hundred hearty souls. The Richwoods township, a few miles from Mountain View, must have been very remote.

The Census takers recorded that Augustus and Elizabeth Derrin (Dearien) had 3 children: 6 year old Mary Derrin, 11 year old David Derrin, and 20 year old Roena Derrin. Since we know that Finetta was born in March, 1861, Roena was 3 months pregnant at the time of the Census, September, 1860. It is possible that when the Census takers visited the home, the parents felt the need to "add a few years" to Roena's actual age because of her pregnancy. But this is speculation on my part, based on the fact that these were the remote backwoods of sparsely populated pre-Civil War Arkansas. Until such time as other reliable information turns up regarding the specifics of Roena, we should trust the accuracy of these Census records.

I will share more in my next post regarding Augustus Dearien, his step daughter Roena, and her disappearance without a trace.
- - -
Steve Shepard
Posted by Steve Shepard at 2:50 PM