The family - that dear octopus
from whose tentacles
we never quite escape,
nor, in our inmost hearts,
quite wish to.
~Dodie Smith

Happy Birthday Tori. Today, September 23, is the 7th birthday of Victoria Cotten, the daughter of Heather and Sean Cotten, and one of the GG Grandchildren of Leroy and Nola Shannon Gower. Tori lives with her family in San Antonio, Texas, a long way from the home of her Grandmother Paula Harrell Tuzzolino and Great Grandmother Vicki Gower Johnston, of Oak Harbor, Washington. 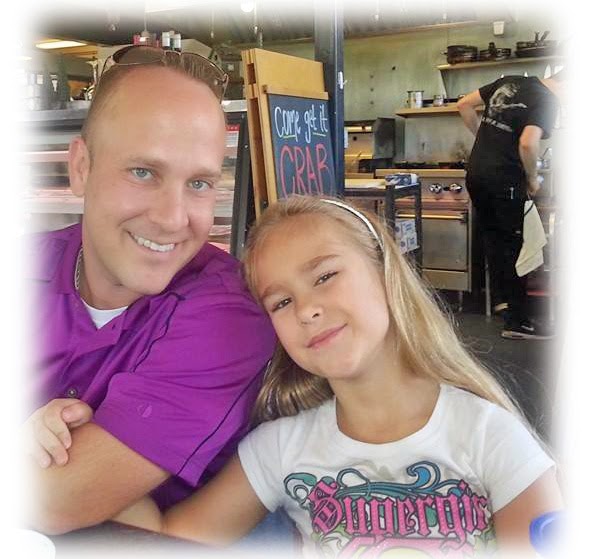 This past summer Tori and her family traveled to Oak Harbor to visit their family. This first picture shows Tori and her dad Sean, taken when they were in Washington just weeks ago.

Remembering a 93rd Anniversary. Later this month, September 29, is the wedding anniversary of Leroy and Nola Shannon Gower, the GG Grandparents of Tori Cotten. In the last few posts I have referred to Nola while discussing her mother, grandmother and other family mambers and the dramatic story of their lives. So it only seems fitting to flow right into at least a brief telling of the life story of Nola and Leroy.

It might surprise some to learn how many members of our family today are too young to have known Nola and Leroy. My Grandmother Nola died just 10 years ago this summer, after living 101 years. So a large percentage of our family remembers her. But Grandpa Leroy has been gone now for 40 years, and most of their 44 direct descendants never had the opportunity to meet him.

Leroy Gower and Nola Shannon were good, decent, hardworking people who were both from poor farming families in Stone County, Arkansas. They were married in 1921 in Mountain View, Arkansas while living in the small country town of New Nata and were married for 53 years until Leroy's death in 1974. Their first child, Hendrix, was born in 1922, and their second, Maida, in 1924. The very next year, when baby Maida was old enough to travel, they moved to Okemah, Oklahoma where some other family members had already relocated. They settled there for 17 years, during which time their third child Vicki was born. In 1942, during World War II, like countless other American in search of jobs, they moved to San Diego, where they lived for almost all the rest of their lives. 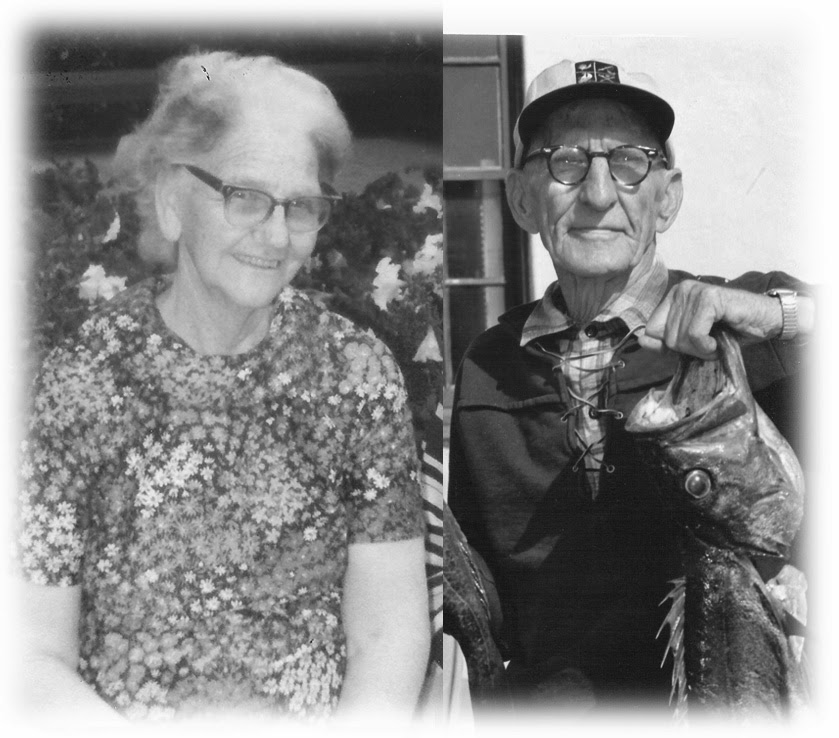 I did not come along until 1948 so I have little first hand experience of their adjustment to life in the big city in Southern California. As best I can tell they adjusted surprisingly well, living happily for most of their California years in a small 2 bedroom, 1 bath house on Lynne Street in East San Diego.

The second composite picture from the 1970s, shows Nola and Leroy. She is enjoying a quiet, happy moment at home, while Leroy is proudly displaying a fish he had just caught on a deep sea fishing adventure off the coast of San Diego.

It was in the Gower home on Lynne Street that all 12 of us grandkids spent considerable family time and enjoyed the welcoming spirit of grandma and grandpa. We always knew there was a place for us in their home. It was where our grandparents taught us responsibility, honesty, hospitality, gardening, Christian charity and good citizenship. And discipline. The kind that came from a switch off a fruit tree in the backyard. As I think about it now, my rear never felt the impact of their switch, but the threat of it was enough to get my attention and alter my behavior. As I remember, other cousins were not so fortunate and had to bear the discomfort of the disciplinary switch.

It is interesting that I write this on the heels of the ongoing news story about Adrian Peterson of the NFL's Minnesota Vikings. This high profile professional athlete has run into serious and very expensive problems because of his use of a switch off a tree to discipline his young son. Times have certainly changed. I am sure none of us cousins ever dreamed that what we accepted as "standard operating procedure" in the family would one day make the national news as unacceptable behavior, and possibly the ruin of a multimillion dollar career. I celebrate the fact that our society is much more aware of the dangers of child abuse and child endangerment.

None of the foregoing takes away from the good memories I have of my grandparents Leroy and Nola Shannon Gower, who were married 93 years ago this month. I celebrate their lives and the values they instilled in us, even as those values are adjusted in this 21st century.

Babies Are Ready To Arrive. Today, September 23, is the day two different women in our family are expecting to give birth. Rachel in Washington and Lyndsey in Texas. I just saw the news on Facebook (late Monday evening) via Lyndsey's aunt Kelly Sauvage that "Karver Ryan is finally here!" Best wishes to Lyndsey and father Colton. Grandma Kerri Aquiningoc says that he is 8lbs 2 oz. and that baby and moma are doing good.
- - -
Steve Shepard
Posted by Steve Shepard at 9:39 PM