The great eventful Present
hides the Past;
but through the din
Of its loud life
hints and echoes
from the life behind steal in.
~John Greenleaf Whittier

At the end of my last post I mentioned the anniversary of the birth of my Grandmother Bura Davis in Indiana 118 years ago this month. This caused me to notice how a whole series of events occurred almost exactly 100 years ago, events that were of great significance to both my Shepard grandparents and their families.

In the fall of 1914 Bura Davis and her family lived on a farm in Beaver County, Oklahoma, having moved there from Spencer, Indiana the previous year. Their farm was not far from where her future husband William Shepard and his family lived. The Shepards had moved to Oklahoma from Illinois almost 10 years earlier. We don't know exactly when Bura and William met -- probably in 1913 -- but we do know that in 1914 this 17 year old teenager and her 25 year old boyfriend began dating and became serious about one another. 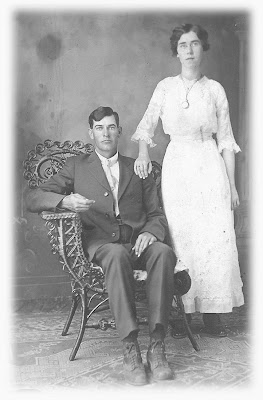 In November of 1914 Bura turned 18, a common age at that time for women to marry. Not long after Bura's birthday, William proposed marriage, and Bura readily and gladly accepted. (See wedding picture from June 2, 1915 of William at 26 and Bura at 18.) But as often happens in life, the joy we experience is soon tempered with sadness. Also in the fall of 1914, William's father, William Elmer Shepard, was diagnosed with stomach cancer.

I am not sure which of these events -- the marriage proposal or the cancer diagnosis -- came first. It may have been the life threatening illness of his father that led to William's concern for his own future and his desire to marry Bura.

Also during this period of time, William's father (and possibly his mother Elvira) joined the South Flat Church of Christ in Beaver County, the congregation to which Bura and her Davis family already belonged. Again I am not sure which of these events came first -- his cancer or his decision to join the church. A cancer diagnosis would certainly bring many of us closer to God. In any case, this was the very first instance of one of our Shepard ancestors belonging to a Church of Christ congregation. 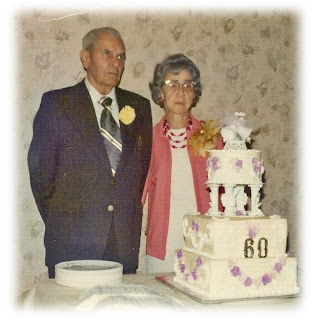 Fast forward 60 years: In 1975 William and Bura Shepard were living in San Diego and attending the El Cajon Blvd Church of Christ, the family's church for most of the 20th century. (See second picture of William and Bura in 1975.) At a special church function, William was recorded reminiscing about family events that transpired in Oklahoma in late 1914. Thanks to my cousin Dane Shepard, we have copies of that recording and a few other recordings of Grandad not long before he died in 1976. In those recordings William discussed, among other things, his proposal to Bura, and his father's cancer.

William said that they were unsure of the precise cause of the cancer. Grandad William attributed it to his father's habit of chewing tobacco. He said that some years later his father-in-law James Davis had died of the same thing, stomach cancer, because of his habit of chewing tobacco. William said in one of the recordings, however, that his father believed his own cancer was caused by something different. William Elmer had suffered a severe injury from a mule kick to his midsection not long before his cancer developed, and went to his grave in February, 1915 believing that was the cause.

In the 1975 Church recording, at 86 years old William got choked up as he recalled how his father, on his death bed, told his son that he wanted William to join the church before he died. How can one not honor a request like that from a dying parent? Shortly thereafter Grandad William "obeyed the gospel", as Grandmother Bura would say, and joined the South Flat Church.

In a matter of weeks several things happened in rapid succession that fall a century ago: my Grandmother Bura came of age, my Grandfather William proposed to her and then joined their church, his father William Elmer became a Christian and then fell deathly ill. Late 1914 was an eventful time for our family, highlighted by decisions and occurrances with lasting consequences that are felt even today, 100 years later.

Are there "hints and echoes" from these historical events that, in the words of John Greenleaf Whittier, "steal in" to our lives today?
- - -
Steve Shepard
Posted by Steve Shepard at 11:44 AM