Let us be grateful
to the people who make us happy;
they are the charming gardeners
who make our souls blossom.
~Marcel Proust

On this week before Thanksgiving, I find myself very grateful for the family that Cindy and I have, in a special way for our son Nathan, his wife Chenda, and their children Preslea, Logan and William. I am also grateful for my siblings and their families and for our wonderful mother Maida Shepard, whose 90th birthday we joyfully celebrated earlier this month.

I am also grateful for babies who were born into our family this year: Kellan Shepard, son of Rachel Shepard and Brian Miller of Kirkland, Washington; and Karver Bearden, son of Lyndsey Aquiningoc and Colton Bearden. The picture shows recent images of Kellan (left) and Karver.

Furthermore, I am grateful for people who married into our family this year, in particular Justin Davis of Blue Springs, Mo. (husband of Amanda Ortiz), and Dee Shannon of Dixon, California (wife of Joan Shepard).

My gratitude also extends to the life Sou Penh of Kampong Speu, Cambodia, who died this year. He was the father of our daughter in law Chenda Shepard. He was known to only a few of us, but will always have a place in the hearts of Chenda and those of us who had met him, and his grandchildren, who never had the privilege of meeting him.

One of the unexpected benefits of doing family research is discovering ancestors who sacrificed so much during their lives, often in ways that contributed to the quality of life that we live yet today. 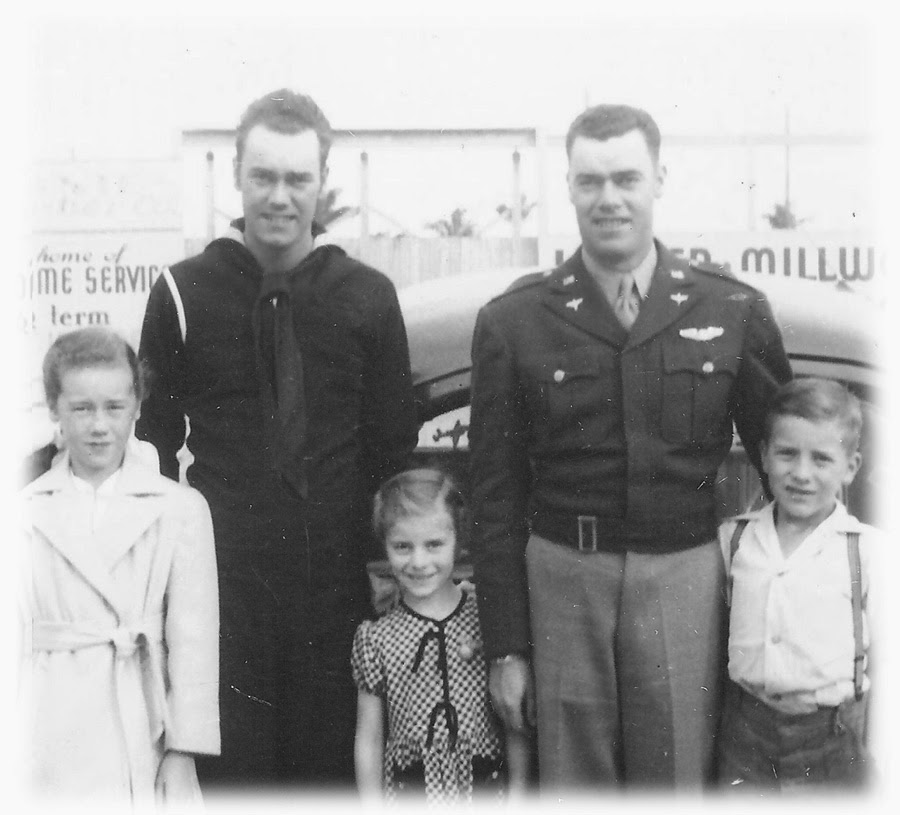 I am thinking in particular about the growing list of soldier ancestors who served in the various wars of our country, from the Revolutionary War, to the Civil War and conflicts of the 20th Century.

The second picture shows Eugene Shepard and brother Elmer Shepard who served during World War II. With them in this picture are the only 3 children that were in the Shepard family in February, 1945 at the time of this picture: their sister Thelma Shepard, and their niece and nephew Beverly Russell and Rex Russell.

All the following soldiers I have written about in the posts of this blog over the last few years. They are all persons to whom we owe a great debt of gratitude, not only as Thanksgiving 2014 approaches, but always. Those with asterisks by their names died in the service of their country.

Revolutionary War:
War of 1812:
Civil War:
World War I:
World War II:
For the dedication and sacrifice of the foregoing, our hearts are filled with gratitude. A prayer this coming week in thankfulness for their lives would be most appropriate.
- - -
Steve Shepard
Posted by Steve Shepard at 6:14 PM