Happy Thanksgiving to all of you! Of all the holidays, this for me is the one that is most family friendly. "What about Christmas," you say? We all love Christmas, of course. But Thanksgiving is so much less stressful that it becomes for me a family time that surpasses all others. I hope this day is an enjoyable one for you and a blessing for your family!

Happy Birthday this Saturday to my cousin Kim Boyd Ortiz-Clark of Blue Springs, Missouri. And to her grandson Damian Ortiz of San Diego. And to Kim's Great Grandmother Callie Spear Davis (1865-1951). The first picture shows the three of them side by side. Callie's picture was taken on her wedding day, January 1, 1896. Kim and Damian's pictures were both taken this past summer.

President Abraham Lincoln, like many presidents before him, issued a Thanksgiving proclamation in 1863, during some of the darkest days of the Civil War. Since Great Grandmother Callie Spear was born in the fall of 1865, she arrived a few days after just the third celebration after Lincoln's proclamation. Being the first child of William and Maggie Spear, Callie's birth must have come with great thanksgiving by her parents and family.

There was one other child in their family at the time, Callie's 2 year old half sister Isolena Spear, who was the child of William Spear and his first wife Caroline Williams Spear. This Caroline died in 1863 after the birth of her daughter Isolena, at just 23 years old. Clearly it was a time of great sorrow in the family: there was the Civil War with all its death and dying, there was the death of young Caroline Williams Spear, and there was the widower William Spear caring for his motherless baby daughter Isolena. Sad, hard times to be sure!

Then life turned a corner for these relatives of ours. The widower William married his dead wife's sister Maggie Spear -- a happy beginning in itself -- and then in 1865 the first of their many children was born, Great Grandmother Callie Spear (who was named after her aunt). Callie's birth must have been accompanied with humble gratitude that the sadness of the past was over and happier times were ahead. Ole Abe knew what he was doing to bring Thanksgiving to the forefront in the dark days of 1863. 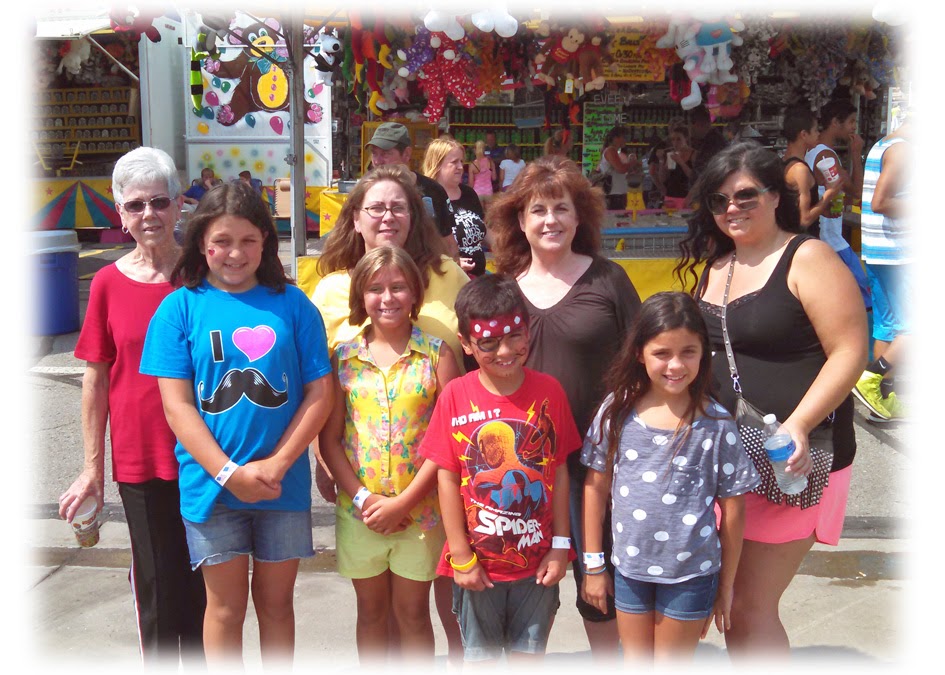 So on this Thanksgiving Day, we remember Callie Spear Davis, who was born 149 years ago on November 29. This Saturday we also celebrate the birthday of Callie's Great Granddaughter Kim Boyd Ortiz-Clark, and Kim's grandson Damian Ortiz. Kim: "Things have really slowed down with our empty nest and most of our grandkids far away now. I won't be at Chucky Cheese this year for my birthday lol but it will be my first time not with Damian on our birthday. I'll celebrate my birthday with my mom, Jeff, Amanda and Justin, Casey and Kyler."

The second picture above, taken this past summer, shows Kim standing behind Damian in the middle in red. On the far right is Kim's daughter Amanda and granddaughter Ashlyn. On the far left is Kim's mother Thelma Shepard Boyd with Kim's granddaughter Ciara in front of her. Also in this picture, in yellow, is Kim's cousin Shannon Wilk with her daughter Emma in front.
- - -
Steve Shepard
Posted by Steve Shepard at 9:48 AM