For it was not into my ear you whispered,
but into my heart.
It was not my lips you kissed,
but my soul.
~Judy Garland

70 years ago.  Happy Memorial Day weekend to all of you! 70 Memorial Day weekends ago was a fascinating time in the life of our nation and in the lives of our ancestors. The spring of 1945 was an extremely critical moment in world history. World War II had been raging for several years, but we were beginning to get the upper hand. On the last day of April, 1945, Adolf Hitler died. A week later V-E day (Victory in Europe) occurred and the successful campaign there was drawing to a close. In 3 months atomic bombs would fall on Japan with death and destruction the likes of which humankind had never seen before. Japanese unconditional surrender would soon follow. It was a time for optimism but still a time of great uncertainty, as Americans regrouped after the war, mourning the loss of American soldiers who died in the conflict, a number that would reach over 400,000. 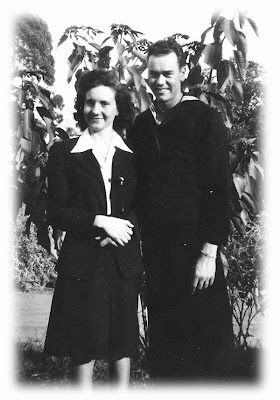 In the midst of all that, on May 24, 1945 -- exactly 70 years ago this Sunday -- my parents Maida Gower and Eugene Shepard, were married. Dad was still in the Navy, stationed in Los Alamitos, California, 100 miles up the road from San Diego, where the Shepards and the Gowers lived. Gene and Maida had met at the El Cajon Blvd Church of Christ, just a stone's throw from where Maida's family lived on Arizona Street in San Diego. After many months of a long distance romance, Gene and Maida were married on a Thursday, in the minister's residence behind the church.

The first picture was taken in San Diego, probably in 1945 soon after they were married. Dad is still in uniform with a wedding ring on his finger, and mom is not showing yet with her first child, born the following March.

In December, 1945, after their wedding in May, Gene was released from military duty and he moved to San Diego to live with his bride fulltime. Their first child Gary was born in the spring of 1946, followed by 5 other children born in San Diego over the ensuing 16 years. They established their home in San Diego until 1978 when Gene retired and they moved to Washington state. He died there in the summer of 2003 in Anacortes, Washington, which is where Maida still lives today. Their descendants now number a few dozen and are scattered around Western Washington, North Texas, and San Diego.

It was a simple wedding ceremony in that parsonage 70 years ago, but their love is still remembered today. Their legacy is a strong one and is celebrated this weekend by all of us who are their family. Thanks to Maida and Gene for their love, their devotion and their lasting witness to the power of Christian love and family affection.

Speaking of Wedding Anniversaries, June 2, 2015 will mark 100 years exactly since my grandparents William Shepard and Bura Davis were married. If you have not yet visited the anniversary page telling about them and honoring them, you can do so by selecting this link.

"What's a matta you... Why you look so sad?" I was asked recently why our ancestors did not smile much when their pictures were taken. It is a good question. And it is true - many of our ancestors did not smile much when in front of the camera. Were they not very happy? Were they intimidated by the camera? Were the problems of their lives so bad that they could not bring themselves to offer a happy countenance? 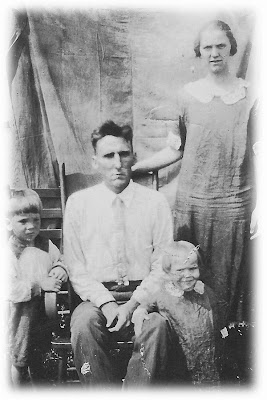 What do you think? I would appreciate your feedback and thoughts on this. Especially from those of you who knew family members from a generation or two ago, like my grandparents Leroy and Nola Gower, and William and Bura Shepard. Many of the pictures we have of them show them with very stoic looks on their faces -- in particular pictures from the early part of the 20th century.

This second picture is a good example. It shows Leroy and Nola Shannon Gower in 1926 probably in Okemah, Oklahoma. With them are their first two children Hendrix and Maida. Leroy and Nola are very dour, showing nothing close to a smile, especially Nola who appears to be frowning.

The boy Hendrix seems totally non-plussed, while Maida has something of an evil little smile on her face. It appears that she was the only one in this small family group who was enjoying the moment, or making any positive connection with the photographer.

Compare the two pictures in this post. In the first one Maida and Eugene are young adults in their early 20s, nearly the same age as Maida's parents in the second picture. The two pictures were taken only 19 years apart, with smiles for the camera being much easier to come by in 1945 than in 1926. But that reflected the times: in 1926 we were working ourselves toward the great depression; in 1945 we were moving into the post-war period of peace and prosperity.

Even so, I know for a fact that my Shepard and Gower grandparents were not unhappy people. They had a sense of humor, they could laugh and have a good time. Why then, when they found themselves in front of a camera, did they often have straight faces, somber looks, serious demeanors?

In the early years of the 20th century, photography was still fairly new and was serious business. Photographers were often professionals and the picture taking moment called for a formal countenance. In addition to that, our forefathers and foremothers lived through some hard times. They were poor farming families in many instances. They endured a lot. Smiles and laughter did not always come easy for them, especially in front of a camera.

These days, with the proliferation of smart phones with cameras, pictures can be taken anywhere at anytime. Photography happens constantly, it seems, and we hardly think twice about it. What a difference from the time in which our forefathers and foremothers lived!
- - -
Steve Shepard
Posted by Steve Shepard at 3:42 PM