The year you were born
marks only your entry into the world.
Other years where you prove your worth,
they are the ones worth celebrating.
~Jarod Kintz

Tomorrow is the birthday of our grandson Logan A. Shepard of San Diego (not to be confused with his second cousin Logan J. Shepard, of Bothell, Washington). San Diego Logan is the middle child of Nathan and Chenda Shepard and the brother of Preslea and William. He is also the 7th Great Grandchild of Maida Gower Shepard. And he is one of the Great Great Grandchildren of William and Bura Shepard and Leroy and Nola Shannon Gower.


Speaking of the late William and Bura Shepard, have I mentioned that their 100th Wedding Anniversary is coming up June 2? The webpage honoring them on this 100th anniversary continues to have information added to it as the weeks go by. You can visit it now to honor Will and Bura and to celebrate this special milestone. 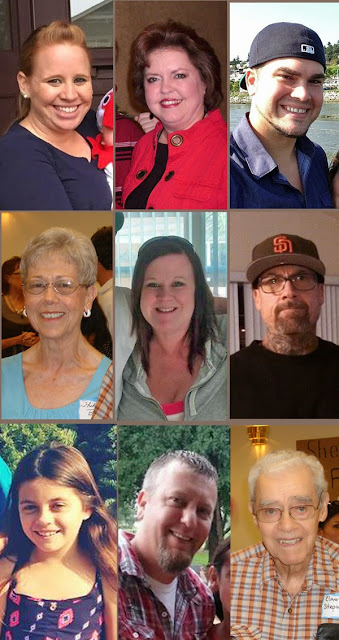 Today is the birthday of Christopher Shepard, also of the Seattle, Washington area, and uncle of the aforementioned Logan J. Shepard.

A wealth of celebrations! Included is a collage of all those with birthdays in our family this week.

This is the most intensive birthday time in the entire year for our extended family: 10 birthdays in a 10 day period (May 11-20).  Happy Birthday to all of them!
- - -
Steve Shepard
Posted by Steve Shepard at 5:54 PM