I am the master of my fate,
the captain of my soul.
~W. H. Henley

Duke Johnston (1932-2015). It is with sadness that I report that my uncle Duke Johnston passed away this past Thursday, July 9. Duke was the husband of my aunt Vicki Gower Johnston, who lives in Oak Harbor, Washington. They have been married for over 25 years. Originally from New York, he retired from the Air Force and had practiced law on Whidbey Island for over 30 years. Duke had been struggling with cancer for many years. 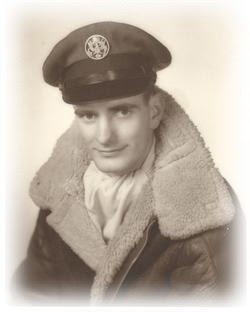 The quote at the top of this post is one that Duke sought to live by. Select this link to read the full obituary for Duke at the website of Evans Funeral Chapel in Anacortes, Washington (which is where I found this wonderful digital image of Duke from back in his Air Force days).

In this time of Duke's passing, our prayers and best wishes go out to aunt Vicki and cousins Paula, Gloria, Michael and David, as well as Duke's entire family.

I have been writing The Shepard's Crook now for nearly 8 years. In that period of time I have shared with you numerous family pictures -- at last count about 1,200. Even considering the fact that that a number of those photos have been shared more than once, that is a lot of family pictures! Sharing them -- especially the old ones -- and the stories they tell has been one of the most gratifying parts of writing this blog. It has been an opportunity to keep alive for posterity the tales of our Shepard, Gower, Davis and Shannon families, tales that will be lost over time if we do not keep telling them. 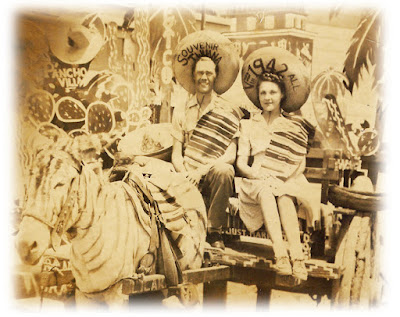 Never Before Seen Photos. But there are some family pictures that I have never shared in The Shepard's Crook. For a whole variety of reasons. Some are very poor quality. Some are unflattering and simply inappropriate, such as hospital photos, or other pictures of people who are very ill. And there are some goofy photos that caught people at a strange or awkward moment. Other pictures I have not shared because they have referenced relationships that occurred before the family members involved found their life long spouse. (Who wants to have their old love interest shown for all the family to see?) 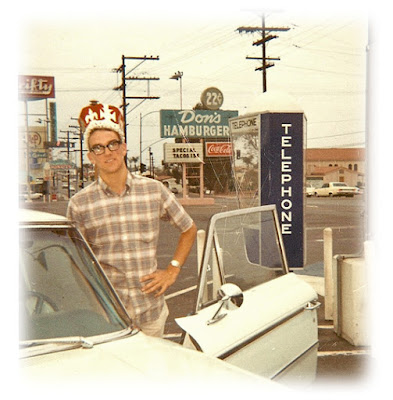 But the time has come, it seems to me, to share with you some of these family pictures that have never before been seen in this blog. I am choosing to share them for the sake of historical accuracy, if for no other reason. In this post are two examples. They are pictures that I have considered including in a blog post a few times, but they simply have not been exactly what I wanted to use in that particular situation.

The picture above on the left shows my dad and his girl friend in Tijuana back in 1942, almost 75 years ago, some 3 years before mom and dad were married. This, by the way, is an example of several "Tijuana pictures", that were taken back in the 1940s when travel south of the border was charming and romantic, when it was easy to get there and back. In recent years, traveling by car to Mexico has gone from charming and romantic, to dangerous and very time consuming.

Just to show you that I want to be fair in my sharing of never-before-seen photos, the third picture is a rather odd photo of me in the spring of 1966 at the corner of El Cajon Blvd and 54th St. in San Diego. You don't see $.22 hamburgers anymore, and public telephones are not in high demand these days. By the way, why is my head tilted a few degrees southward? Full disclosure: this picture was taken about 9 am on a Saturday morning after a young woman named Cindy Harris and I had just finished partying all night long. Enough said.

I have more never-before-seen family photos to share, but those I will save for another time. Stay tuned.
- - -
Steve Shepard
Posted by Steve Shepard at 5:16 PM