You have to love a nation
that celebrates its independence,
not with a parade of guns, tanks, and soldiers
but with family picnics
where kids throw Frisbees
the potato salad gets iffy
and the flies die from happiness.
~Erma Bombeck
Hello Shepard Family and Friends,

Greetings on this first day of July, as the weekend of Independence Day approaches. Cindy and I are still on the go, this time to sunny Tucson, Arizona to visit friends. 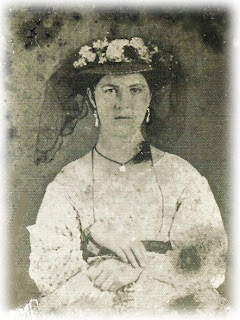 In my last post I shared an old family picture of my GGgrandmother Margaret (Maggie) Williams Spear (1845-1904), dressed in white with a black flowery hat. (see picture on right)

There is no date on the copy of the picture that I received, but one can attempt to pinpoint its age by comparing it with another picture I posted on this blog two years ago. That picture, which I am including below for comparison, also shows Maggie (on the left) with her daughter Caroline (Callie) Spear Davis, both dressed in black. It was probably taken about 1880, when Callie (born 1865) appears to be a teenager. 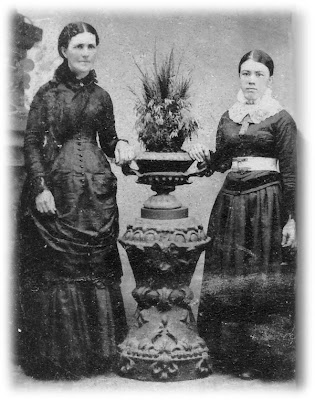 In the picture of Maggie dressed in white, she appears to be a young adult or an older teen, certainly younger than she is in the 1880 picture. Notice in her younger picture there is no wedding ring. Maggie married William Spear in January, 1865, a few months before her 20th birthday. The picture of her in white may have been taken about that same time, which would make it about 145 years old.

The art of photography in 1865 was very young, which explains the quality of the picture. It appears to be a "tintype" or a "daguerreotype", which were early photo developing methods made famous during the American Civil War (1861-1865) and the years following. At that time cameras were only owned by professionals who took their suitcase sized camera setups to towns across America and for a reasonable fee provided a family with a portrait or two. 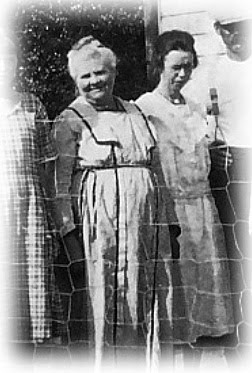 The picture above of Maggie in white is a real gem. The black lace on the flowery hat was probably typical for this time during or just after the bloody Civil War, when death was a common visitor to households. In addition, Maggie's older sister Caroline Williams Spear had died at 24 in 1863, leaving a daughter Isolena Belle, who "aunt Maggie" helped raise. She is well dressed with modest jewelry, and a straight face, typical for this period, as she sat before a big box on a tripod manned by a professional who was covered with a heavy blanket.

Some of you may be more familiar with this picture than I am. If you have other insights into it, please let me know. And if you happen to have other old family pictures like this one tucked away in your photo archives, please share them. The stories they tell can be amazing and are worth sharing.

Happy Birthday Elvira Owen. Since I am sharing photos of women in our family born in the 19th century, I will include one more. On this day, July 1, in 1864, another Civil War baby was born, Elvira Owens Shepard. The mother of my grandfather William Shepard, she was born in New Douglas, Illinois, about 40 miles northeast of St Louis. The third picture, taken in the early 1920s when she was about 60, shows Elvira on the left with her daughter-in-law Bura Davis Shepard on the right.
- - -
Steve
Posted by Steve Shepard at 8:48 AM