Only the Good Die Young

Only the good die young.~old saying

If the old saying is true that "Only the good die young", then we have had some very good people in our family. Among them would be Manuel Aquiningoc, a young man of Guamanian descent, who married into our family in 1990. 18 years ago this month, at the age of 30, Manuel died in San Diego. Today would have been his 49th birthday. The tragedy began when he was arrested one evening at his home. The next morning he was found dead in his jail cell. He left behind a young wife, Kerri Shepard Aquiningoc, a 1 year old daughter Lyndsey, and another child on the way, who would be named Mandi. (The picture above shows Manuel, Kerri and baby Lyndsey in 1992.) Manuel's death was a tragedy, and a blow to his family that was very difficult to deal with, especially by those closest to him.

Like many people in our family who have found themselves having to deal with a tragic situation, Kerri, Lyndsey and Mandi have done their best to make the most of life in the last 18 years. Their most recent celebration was Mandi's graduation from High School last month. The picture below, taken last month, shows Lyndsey and Mandi Aquiningoc with their Shepard grandfather Gary. 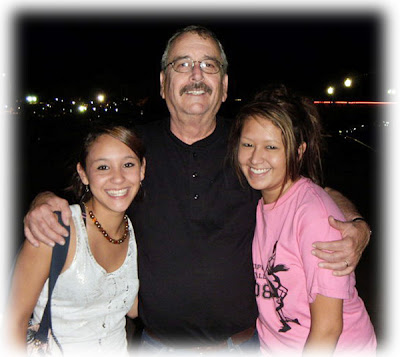 The fact of the matter is that our family has had to endure other very difficult deaths of young folks. In the 1970s we endured the deaths of Linda Shepard (20) and Bev Russell (35), and then later in the 1990s, the death of Karl Wilk (27) -- 2 grandchildren and a Ggrandchild of Will and Bura Shepard. Also in the 1970s my wife Cindy endured the untimely deaths of two of her cousins in their 20s, Gloria and Chuck Eeds. Whenever a young person's life is cut short, it is especially painful.

Other young members of our family have died in generations past. Their deaths must have hurt their loved ones as much as those that we have experienced.
These episodes in our family history are not easy to write about. Some of them are shocking, others are heartbreaking. But they are all part of the story of who we are. They remind us of how fragile and difficult life can be. But most of all they help us see that the most important thing is not what life gives us, but what we make of it. It is heartwarming to see that Kerri and Lyndsey and Mandi are making the most of theirs.
- - -
Steve