Gratitude for the Happy and the Sad, Nov 23

There is an angel in the family who,
by the mysterious influence
of grace, of sweetness, and of love,
renders sorrows less bitter.
~Giuseppe Mazzini

Greetings to all of you on this week of Thanksgiving. Cindy and I are still enjoying ourselves on the Island of Oahu in Hawaii, with Nathan and Chenda and Preslea. As the Thanksgiving holiday approaches, I am grateful for all family memories, many of which are joyful and pleasant, some of which are not, as this post will illustrate. 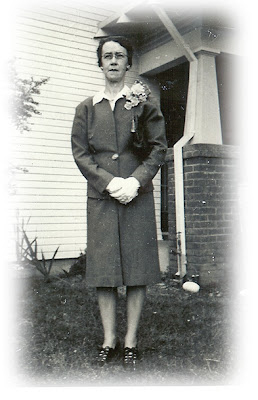 Remembering Bura. It is with joyful gratitude that we remember Bura Davis, my grandmother, who was born 114 years ago this month in Spencer, Indiana. (See picture of Bura Davis Shepard, taken in 1947 in San Diego.) On November 8, 1896 she entered this world, the first child of the young couple Callie and James Brooks Davis.

I say "young couple," but in truth these two married and began their family later in life than most young couples in the late 19th century. On January 1, 1896, when they were married in Spencer, Indiana, James was 25 and Callie was 30. They went on to have 6 more children after Bura was born.

Recently when I was in Anacortes, Washington for a family gathering, my brother Darrell told a story about Bura that took place near the end of her life, when she had moved to Anacortes to be with her son Eugene and family.


On one occasion Eugene, Maida and Bura were visiting Darrell and his wife Mary in Helena, Montana. They were in the living room of their Helena home with Bura, who was approaching 90 years old. She was sitting in a comfortable chair taking a nap. They were trying to keep their voices down so as not to disturb her, but their conversation became a little heated.

"Why don't you just shut up," one of them said. "Why don't YOU shut up," the other replied. Then out of the blue, Bura spoke up. Without opening her eyes, or hardly moving a muscle, she said: "Why don't you BOTH shut up," and then continued with her nap. 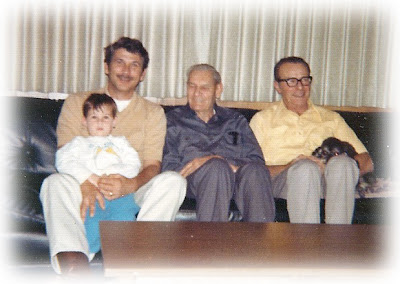 Bura Davis and her husband Will Shepard have quite a number of family members who survive them today, many of whom are old enough to remember them fondly, myself included.

A Life Cut Short. One of the 21 Ggrandchildren of Will and Bura was Karl Wilk. He was born 41 years ago this month in San Diego. Born Nov 5, 1969, he was the oldest child of Beverly and Phil Wilk. (See 1973 picture of young Karl in front of his father Phil, next to his Ggrandfather Will Shepard and his grandfather Bill Russell.) Karl died way too young at the age of 27 in San Diego in October, 1997. His is not the only death in our family attributed at least partially to substance abuse, but we can pray that it would be the last.

We'd like to think that all our family memories are pleasant and that everyone in our family tree lived long, adversity free lives. But we know better. So we take the sad with the happy, the regretful "what might have been", with the joyful celebrations. And in humble gratitude, we learn as we go along.
- - -
Steve

Posted by Steve Shepard at 2:19 AM