You can kiss your family good-bye
and put miles between you,
but you carry them with you in your heart,
because you do not just live in a world
but a world lives in you.
~Frederick Buechner

Greetings to all of you, wherever you may be, from San Francisco, California where Cindy and I are once again on the move. 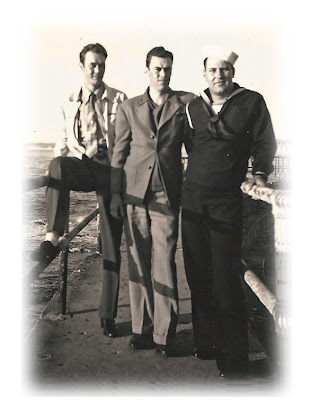 Today is Veteran's Day. I am thinking today about two of my favorite Vets, my dad Eugene Shepard (1921-2003) and my uncle Elmer Shepard, both of whom served during World War II. (See the first picture of these two veterans with a serviceman buddy of theirs in San Diego about 1943.)

Other relatives who served their country during WW2 include Elmer's wife Beryl Swinney Shepard, and my wife Cindy's father AND mother, Joe and Paula Harris. (The picture below, taken in the early 1940s, shows Paula on the right next to her sister Juanita Eeds, both of whom served in the Women's Army Corp during WW2. They live in San Diego today.)

The more I research our family, the more I learn about other relatives who served their country, and in some instances lost their lives as a result.

I have written numerous times in this blog about my GGgrandfather William Shepard (1835-1862) who died in the American Civil War and who is buried with other Veterans in Evansville, Indiana. His death in 1862 from injuries suffered in battle is the very reason I can find no information about any of our Shepard ancestors before him. He did not live long enough to meet his son, much less give him information about his ancestry. 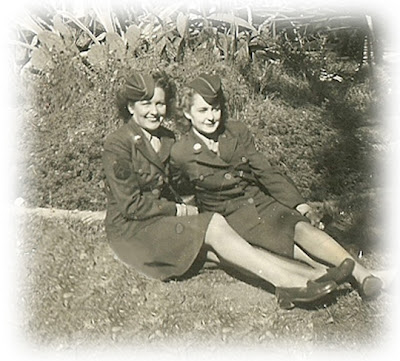 It is a genealogical black chasm that I have been unable to bridge. You would think that his military service would have resulted in records in our National Archives. But search as I might, I have found nothing that tells me anything substantive about his parents, or even his wife. I have found a few unsubstantiated leads, but nothing that can be verified. At least not yet.

On the other hand, I have discovered other ancestors who have served their country in generations past and information about them and their progenitors. People like Edmond Owens (1795-1864) a "Tennessee Volunteer" in the war of 1812, Robert Columbus Shannon (1893-1923) and Benjamin Harrison Davis (1888-1963) in WW1, Captain Abell Gower (1640-1689) in the Indian wars, Andrew Pickens (1753-1844) and Marmaduke Davis (1760-1855) in the Revolutionary War. (By the way, in my next post I plan to share some interesting new information that I have come across regarding Marmaduke Davis.)

One can add to the foregoing list those of more recent generations who have served in the military, like Terry Kilpatrick (1945-1968), Darren Boyd, Jimmie Gower, Michael Harrell, Cindy's brother Joe Paul Harris (1950-2009), and others I have not mentioned.

All these Veterans are part of the world that lives in us, and we are truly grateful.
- - -
Steve

Posted by Steve Shepard at 4:09 AM