Genealogy:
The art of tracing yourself
back to better people.
~author unknown
Hello Family and Friends,

Greetings to all of you from Nashville, Tennessee! Cindy and I have returned stateside, at least as far as Nashville, where we are attending the General Assembly of the Christian Church, a wonderful gathering of several thousand people from all across North America. 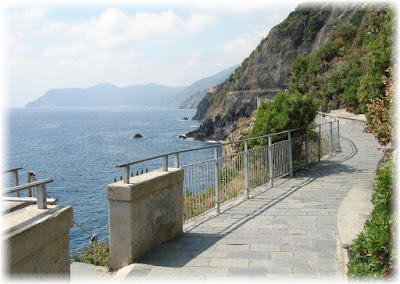 One of most scenic places we visited while in Italy last week was "The Cinque Terra", a beautiful coastal area on the Mediter- ranean. It is 5 small towns on a rocky seacoast, connected by a wonderfully photogenic trail, part of which we walked one day last week. The first picture shows the beginning of this beautiful, popular trail that winds along the side of the cliffs.

Select this link to see other pictures of our recent trip to Italy.

A Genealogical Trek. When our conference in Nashville concludes we will begin a genealogical trek here in America's heartland, and will retrace the footsteps of GGgrandfather William Shepard.

The 1860 U.S. Census records show him at age 24 living north of Indianapolis in the small town of Wabash, Indiana. Historical records also show that a year later, in September, 1861, as an expectant father, he joined the Union Army to fight in the Civil War.

William's 41st Regiment (2nd Indiana Cavalry), a unit of almost 2,000 men, was the first complete Civil War regiment to be formed in Indiana. William began his military service by going south with his unit from Wabash to Indianapolis, then in December, 1861 to Louisville, Kentucky. From there they engaged in their first skirmish with the enemy at Bowling Green, Kentucky. While there, his son William Elmer Shepard was born back in Indiana. 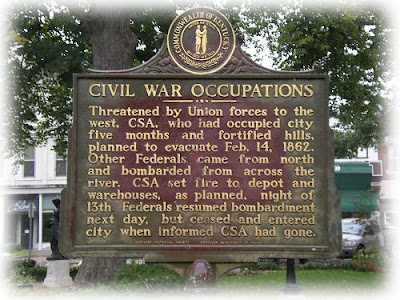 The second picture shows a plaque that resides in Bowling Green, Kentucky. In the 5th line of the text there is a reference to "Other Federals" who "came from the north". These "other federals" included William and his regiment, who we know engaged the rebels in February at this very location. (Thanks to Richard Edling for the use of this photo.)

From Bowling Green, William and his comrades in arms made their way in late February to Nashville, Tennessee, the city where Cindy and I find ourselves today. As part of the "Union Army of the Ohio", under the command of General Ulysses S. Grant, William assisted in the occupation of this city until early April, 1862. So it took him from early December, 1861 to February 25, 1862 to make the nearly 400 mile journey from Wabash to Nashville on foot during wartime, through the rain and the mud and the fear of enemy combat.

Tomorrow Cindy and I will make the opposite journey in a car in one short day's drive as we travel from Nashville, Tennessee northward to Wabash, Indiana. Obviously ours will be a very different journey under completely different circumstances. I doubt if we will encounter any rain or mud as we travel along hundreds of miles of Interstate Highway. And the closest thing to an enemy combatant will be the heat and the fatigue we may feel during the drive. 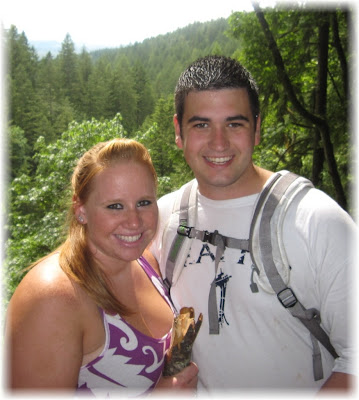 Even so, as we make the journey we will humbly remember the strength and courage of people like my Grandad's Grandfather William Shepard, whose service to our country still evokes our deepest gratitude. I will share more about William and his military service in my next post.

This Just In. I recently received two bits of news regarding family members and readers of this blog. The first is the good news that my nephew Patrick Shepard (son of Darrell and Mary) and his girl friend Nicole Haw, both of Bothell, Washington (see their picture), are now engaged to be married! The wedding will probably be sometime next spring, although the exact date has not yet been set. Congratulations to Patrick and Nicole!

I also received some sad news from 2nd cousin Jerry Davis of Granbury, Texas. His 23 year old grandson Jordan Parsons of Paola, Kansas, died tragically last Tuesday in a motorcycle accident. Our prayers and best wishes are with Jerry, his daughter and their entire family in this very difficult time of loss.
- - -
Steve

Posted by Steve Shepard at 7:13 AM

One of the best present I could imagine Thanks a lot