An Irishman's heart is nothing but his imagination.
~George Bernard Shaw

Hello to all of you from Limerick, the third largest city in the Republic of Ireland, where Cindy and I and our traveling companions are spending a few days. This was one of the cities from which some of our Irish ancestors sailed to America. 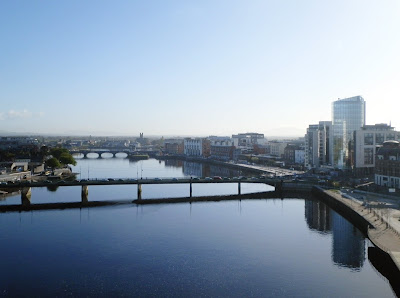 The first picture was taken yesterday from our hotel, situated over the Shannon River which you see here in the morning light. Over the Shannon Bridge moves the modest rush hour traffic as it continues through the Shannonbridge Roundabout on the right. What you can't see is Shannon Street just beyond the buildings on the right. I am guessing that Grandma Nola Shannon Gower would have been impressed.

Her Shannon ancestors were among those who came from Ireland. Dexal Shannon's family history book says that 4 Shannon brothers, sons of Robert Shannon, (including Thomas Shannon, Grandma's 4X Great Grandfather) came to America from Munster, Ireland (where Limerick is located). If they did, they would have sailed away from the docks that were once situated alongside the Shannon River in this first picture. Other genealogical sources say that the Robert Shannon family was from the north of Ireland, having immigrated first from Scotland and then to America, presumably from a northern Irish port.

There is strong evidence, however, that Grandma Gower's Pickens ancestors did sail to America from Limerick. Willie and Marge Pike Pickens (who were also Grandma Gower's 4X Great Grandparents) and their 6 children made the dangerous voyage which began at the docks on the Shannon River very near where Cindy is standing in the picture below. They crossed the Atlantic in the early 1700s and settled in north Philadelphia. We don't know what motivated them to immigrate, although we do know that Willie Pickens was from France and had probably not been in Ireland very long. There may well have been economic considerations, or perhaps he was simply a wanderer who needed one more adventure. 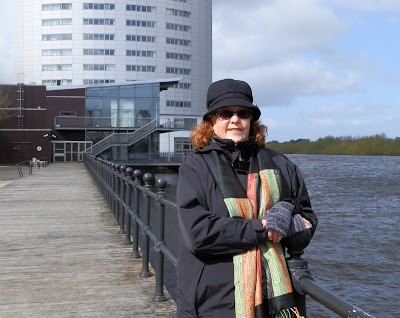 Marge Pike, on the other hand, may have had strong family ties in the Limerick area. One of the sources I have read here in the Limerick Library says that Pike (also spelled Pyke) was a common Anglo-Irish name in this particular part of the country.

Being here in Limerick is like stepping back in time, even though there are constant reminders that in the 300 years since the Pickenses left Ireland this land has changed tremendously.

One of Limerick's claims to fame is the fact that it is often said to be the origin of the familiar (often bawdy) poem style called a limerick. With that in mind, here then is a (not so bawdy) limerick about Limerick.

Here's an ancestral tale that's terrific,
'Bout an Ireland town, name of Limerick,
where our kin sailed away,
in the "new world" to stay,
on a trip that was ever so epic.

Looking back o'er those 300 years,
at their faith and their pain and their tears,
the eight of them showed
in the courage that flowed,
that they merit each one of our cheers.

If we will remember the strain
of those eight family members who gained
their American dreams
from their hopes and their schemes,
then their efforts will not be in vain.

This, then, is their story so fine,
that I've taken great care to outline,
how from Limerick town,
they risked being drowned,
and fashioned a future divine.